A developer's guide for the Specter Desktop Extension framework.

We currently rework the naming of extensions/plugins/services. If not otherwise stated, for now, they are used interchangeably.

You can create an extension with an up to date Specter Desktop instance as simple as this:

The created file structure looks like this and you will feel right at home if you have some knowledge about how Flask works:

As much as possible, each extension should be entirely self-contained with little or no custom code altering core Specter functionality. There is a name for that: Extension framework. The term extension will be used for all sorts of extensions whereas plugin will be used as a component which can be de-/activated by a user.

A description of how to create your own extension can be found above.

All the attributes of an extension are currently (json support is planned) defined as attributes of a class which is derived from the class Service (should be renamed). That class has attributes which are essential. So let's discuss them briefly.

Here is an example. This class definition MUST be stored in a file called "service.py" within a package with the name org-id.specterext.extions-id.

This defines the base Service class (to be renamed to "Extension") that all extensions must inherit from. This also enables extension auto-discovery. Any feature that is common to most or all Service integrations should be implemented here. With inheriting from Service you get some useful methods explained later.

The id needs to be unique within a specific Specter instance where this extension is part of. The name is the display name as shown to the user in the plugin area (currently there is not yet a technical difference between extensions and plugins). The icon will be used where labels are used to be diplayed if this extension is reserving addresses. The logo and the description is also used in the plugin area ("Choose plugins"). If the extension has a UI (currently all of them have one), has_blueprint is True. The blueprint_module is referencing the controller module where endpoints are defined. It's recommended to follow the format org.specterext.extions-id.controller. isolated_client should not be used yet. It is determining where in the url-path tree the blueprint will be mounted. This might have an impact on whether the extension's frontend client has access to the cookie used in Specter. Check config.py for details. devstatus is one of devstatus_alpha, devstatus_beta or devstatus_prod defined in cryptoadvance.specter.services.service. Each Specter instance will have a config variable called SERVICES_DEVSTATUS_THRESHOLD (prod in Production and alpha in Development) and depending on that, the plugin will be available to the user.

As stated, you can have your own frontend with a blueprint. If you only have one, it needs to have a / route in order to be linkable from the choose your plugin page. If you create your extension with a blueprint, it'll also create a controller for you which, simplified, looks like this:

But you can also have more than one blueprint. Define them like this in your service class:

You have to have a default blueprint which has the above mentioned index page. In your controller, the endpoint needs to be specified like this:

You might have an extension which wants to inject e.g. JavaScript code into each and every page of Specter Desktop. The extension needs to be activated for the user, though. You can do that via overwriting one of the inject_in_basejinja_* methods in your service class:

An Address can be associated with a Service (e.g. addr X received a smash buy from Service Foo) via the Address.service_id field.

A Service can also "reserve" an Address for future use by setting Address.service_id. The normal "Receive" UI will automatically skip any reserved Address when generating a new receive address. The reserved addresses are interleaved with ready-to-use addresses so that we don't create any potentially confusing wallet gaps (e.g. addrs 4, 6, and 8 are reserved but addrs 3, 5, and 7 are available).

Users can also manually associate an existing Address with a Service (this is useful when the user has info that the particular Service api can't provide for whatever reason).

Note: TODO: manually un-reserve an Address from a Service.

Effort has been taken to provide Service data storage that is separate from existing data stores in order to keep those areas clean and simple. Where touchpoints are unavoidable, they are kept to the absolute bare minimum (e.g. User.services list in users.json, Address.service_id field). As an extension developer, you have the choice to completely manage your own persistence or rely/use one of the two options: You either have data which need encryption (via the passwords of the users) or you don't have that requirement.

Some Services will require user secrets (e.g. API key and secret). Each Specter User will have their own on-disk encrypted ServiceEncryptedStorage with filename <username>_services.json. Note that the user's secrets for all Services will be stored in this one file.

For this reason Services cannot be activated unless the user is signing in with a password-protected account (the default no-password admin account will not work).

Note: During development if the Flask server is restarted or auto-reloads, the user's decrypted user_secret will no longer be in memory. The Flask context will still consider the user logged in after restart, but code that relies on having access to the ServiceEncryptedStorage will throw an error and/or prompt the user to log in again.

It is up to each Service implementation to decide what data is stored; the ServiceEncryptedStorage simply takes arbitrary json in and delivers it back out.

This is also where Service-wide configuration or other information should be stored, even if it is not secret (see above intro about not polluting other existing data stores).

Because the ServiceEncryptedStorage is specific to each individual user, this manager provides convenient access to automatically retrieve the current_user from the Flask context and provide the correct user's ServiceEncryptedStorage. It is implemented as a Singleton which can be retrieved simply by importing the class and calling get_instance().

This simplifies code to just asking for:

As a further convenience, the Service base class itself encapsulates Service-aware access to this per-User encrypted storage:

Whenever possible, external code should not directly access these Service-related support classes but rather should ask for them through the Service class.

A disadvantage of the ServiceEncryptedStorage is, that the user needs to be freshly logged in in order to be able to decrypt the secrets. If you want to avoid that login but your extension should still store data on disk, you can use the ServiceUnencryptedStorage.

Annotations are any address specific or transaction specific data from a Service that we might want to present to the user (not yet implemented). Example: a Service that integrates with a onchain store would have product/order data associated with a utxo. That additional data could be imported by the Service and stored as an annotation. This annotation data could then be displayed to the user when viewing the details for that particular address or tx.

Annotations are stored on a per-wallet and per-Service basis as unencrypted on-disk data (filename: <wallet_alias>_<service>.json).

Note: current Service implementations have not yet needed this feature so displaying annotations is not yet implemented.

Unfortunately, the two unencrypted classes are derived from the encrypted one rather than having it the other way around or having abstract classes. This makes the diagram maybe a bit confusing. 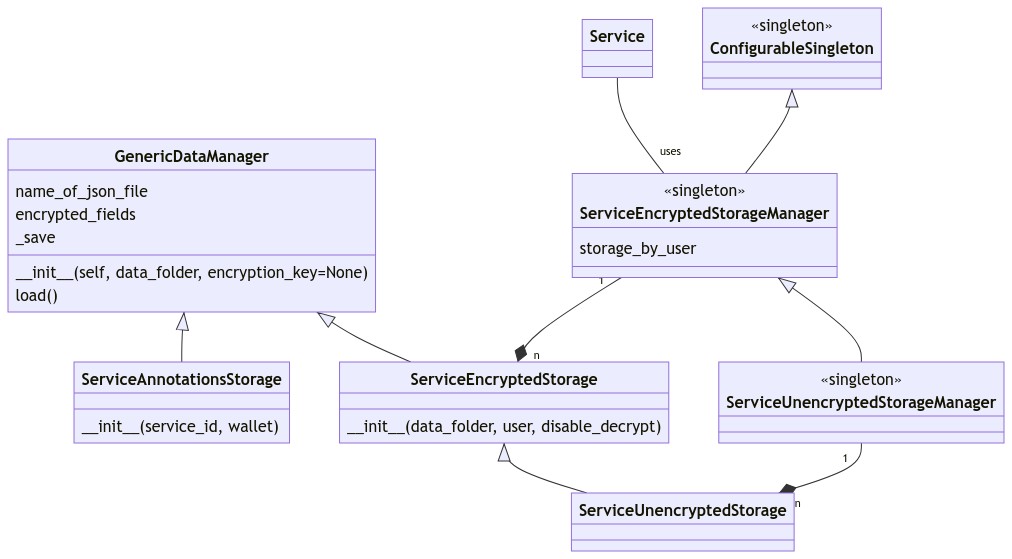 In order to separate the service-configuration from the main-configuration, you can specify your config in a file called config.py. It's structure is similiar to the specter-wide config.py, e.g.:

In your code, you can access the correct value as in any other flask-code, like api_url = app.config.get("SWAN_API_URL"). If the instance is running a config (e.g. DevelopmentConfig) which is not available in your service-specific config (as above), the inheritance-hirarchy from the mainconfig will get traversed and the first hit will get get configured. In this example, it would be BaseConfig.

Your service class will inherit a callback method which will get called for various reasons with the "reason" being a string as the first parameter. Checkout the cryptoadvance.specter.services.callbacks file for the specific callbacks.

Some important one is the after_serverpy_init_app which passes a Scheduler class which can be used to setup regular tasks. A list of currently implemented callback methods along with their descriptions are available in /src/cryptoadvance/specter/services/callbacks.py.

The minimal url routes for Service selection and management. As usual in Flask, templates and static resources are in their respective subfolders. Please note that there is an additional directory with the id of the extension which looks redundant at first. This is due to the way blueprints are loading templates and ensures that there are no naming collisions. Maybe at a later stage, this can be used to let plugins override other plugin's templates.

You can extend the settings dialog with your own templates. To do that, create a callback method in your service like:

In this case, this would add a tab called "myexttitle" and you're now supposed to provide an endpoint in your controller which might be called myext_something e.g. like this:

If you want to have an additional wallet tab, you would specify something like:

The some_settingspage.jinja should probably look exactly like all the other setting pages and you would do this like this: